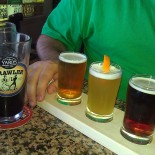 For the first time since the Ravens came to town, I was able to ring dem O’s in on opening day with a National Premium.  As the Baltimoron in the group, let me assure my fellow bloggers that this is no ordinary run of the mill yellow swill that the microbrewery revolution was founded against.  Premium was THE flagship beer of Baltimore and can still hold its own today against any of the paler beers on the market.

You may be familiar with National’s other beer, Natty Boh, the cheap, headache beer of Baltimore.  Of the two varieties of National, it’s a shame that Boh survived as Premium was discontinued in 1996.  Premium is a completely different beer from its cousin.  National was proud of the fact that they brewed with imported hops and shipped their beers in brown bottles like the European brews.  In the age before microbrews, Premium took great pains to showcase that it was indeed a craft beer and National Brewing was rewarded by a loyal following in the Free State.

Prior to the 70s Charm City had three major breweries; Gunthers, American, and National.  My Great Uncle sold Gunther’s and even he would admit it was tough to get National Premium drinkers to switch beers.  Times change and all three beers are no longer produced in B’More.  American’s and National’s brewery buildings have taken on a second life as home to a non-profit and mixed office and residential spaces respectively.  Even though it has a Baltimore name, Premium is now brewed in Dover Delaware.    (in fact Premium is not brewed by the same company as Boh)

My Dad, who is much more of a scotch drinker than a beer drinker, always liked the pale, dry, crisp taste of Premium.  We moved to South Jersey when I was young but like the commercials of the time said, he would arrange for “several cases to be shipped” so he could enjoy.    Our last toast at Memorial Stadium was with Premium and his birthday present last fall was case (which by the way didn’t last long and has been replaced several times since).

From the instant you open the bottle, you are greeted with an sweet aroma of hops that tell you this beer is crafted.  It has the aroma and bitterness of an IPA which quickly dissipates to finish crisply like a pils.  The aroma is exactly what I remember, however when taking a bottle straight from the fridge the taste is not what I remember.  I found that it tastes better if you let it chill in a garage or basement instead of the fridge or if you let it sit on a counter for about 10 minutes after removing it from the fridge before opening.  Either way, I cannot wait until summer to steam a pot of number ones and wash them down with a Premium or two!!

This entry was posted on April 3, 2013 by mapnj in Uncategorized.